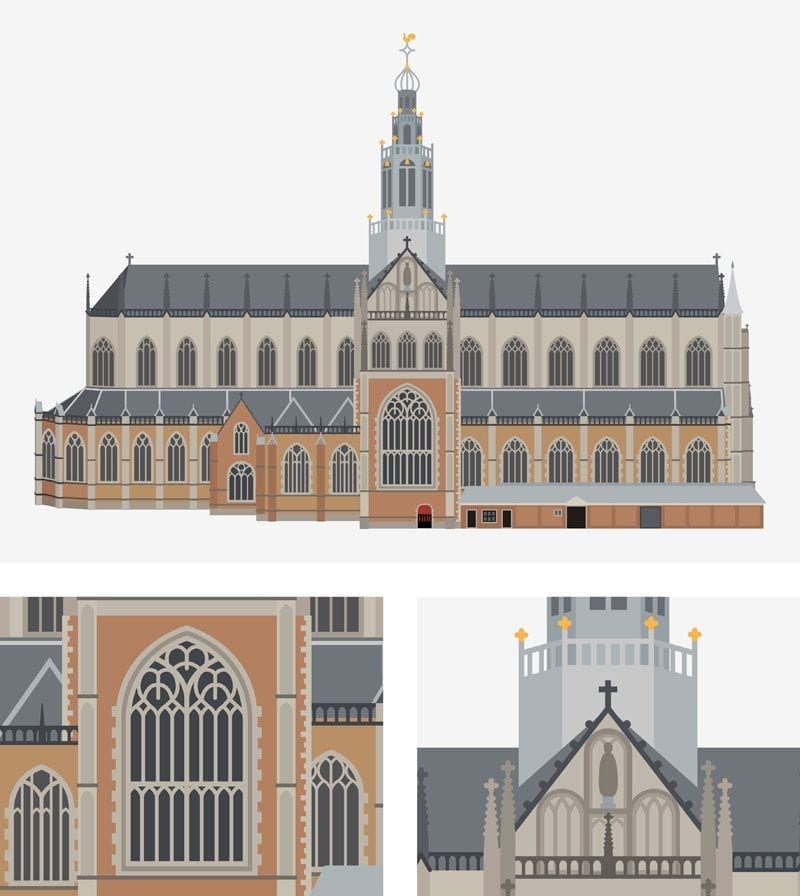 Available as A4 print and as a card.

1927/5000
The Grote or Sint-Bavo church, named after St. Bavo, is a medieval cross church in Gothic style. Built between 1370 and 1520. The church belongs to the Top 100 of Dutch UNESCO monuments.
The church is built as a Catholic church. In 1559 the church became the cathedral of the Diocese of Haarlem, until the church became Protestant after the Reformation.

The current church has had several predecessors. In 1370 the last predecessor was badly damaged by a fire. This church was then largely restored. Around 1400 a new gothic choir was built, which is still there today.
Between 1445 and 1500 the current church was built up in parts under the direction of various architects. In one of the plans a large west tower was included, but it was never built.

In 1502 Cornelis de Wael (builder of the Dom in Utrecht) made a design for a stone tower. When he died in 1505 he was succeeded by Antoon I Keldermans. Soon it turned out that the church could not keep the weight of the stone tower. Between 1514 and 1517 the tower was also demolished again.
It was decided to build a 74-meter high lead-covered wooden tower at the junction of the church. In 1520 the (current) tower was ready.

There are about 400 tombstones in the church. Under the choir is the grave of Frans Hals.

According to the “Legend of the Haarlem shield”, the two bells in the top lantern of the tower during the Fifth Crusade were taken from Damiate by Haarlem fighters and placed in the tower. In reality they were a gift from Johannes Dircks from Aalst to the bishop of Haarlem in 1562.

Since then, the two clocks are folded every evening between 21:00 and 21:30. Originally as a signal for closing the city gates.
The little dummies (called Piet and Hein) can still be heard every day to commemorate the conquest of Damiate.