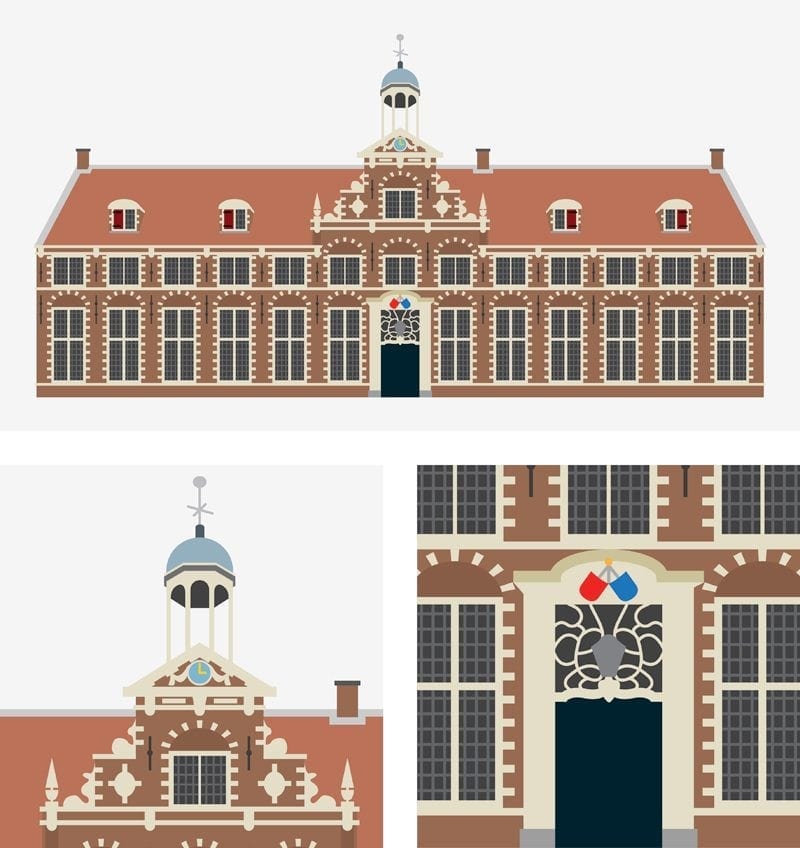 Available as A5 print and as a card.

The current building of the Frans Hals Museum dates back to the 17th century. The museum is situated around a courtyard garden, which was built in 17th century style.
It was originally a Oudemannenhuis. The Oudemannenhuis was so beautiful at the time that people wrote: the ‘Old men’s house seems to be a Palace of a Prince’.

Whoever designed it is uncertain. Previously, it was thought that Lieven de Key made the design. Today it is thought that the design by Pieter van Campen is the father of Jacob van Campen who, among other things, designed the Palace on the Dam.
The Old Man’s House was built in 1607-1611. To finance the construction, a rhetoric party and a large lottery were organized, with a total proceeds of 55,000 guilders.

On February 1, 1609, the first old men involved the building. Two men lived in each cottage. In 1810 the building received new residents: 127 orphans. The old men moved to the Proveniershuis on the Grote Houtstraat.
In 1854 the orphanage became the property of the Dutch Reformed Church.

The municipality bought the building back from the church to house the urban art collection. Parts of the building are demolished and rebuilt in early 17th-century style to a design by city architect L.C. Dumont. The original plan, the entrance gate, the main building, the regents’ rooms and the infirmary are maintained.
On May 14, 1913 the museum was opened.
SOURCE: WIKIPEDIA AND WEBSITE FRANS HALS