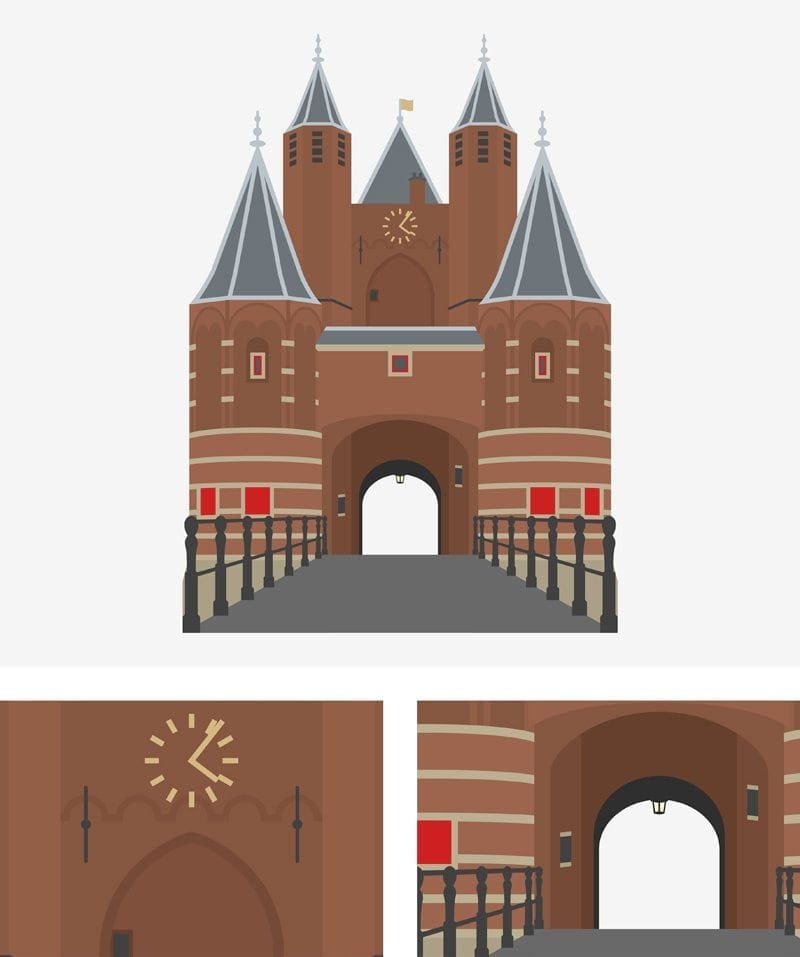 Available as A4 and A3 print and as a card.

The Amsterdam Gate, built in 1355, is the only one of the 12 city gates still standing. It was built at the first magnification of the city. A part about the Spaarne was then drawn inside the ramparts. Until the 17th century the gate was used for traffic towards Spaarnwoude and Amsterdam.

At first it was called the Spaarnwouderpoort, because they went to Spaarnwoude via this road. After the arrival of a new path and a new canal in the direction of Amsterdam, it quickly became the Amsterdam Gate, since it was easier to travel back and forth to Amsterdam within one day.

According to tradition, Kenau Simonsdaughter Hasselaer would have stood on the walls of the ramparts at the Amsterdamse Poort to stop the Spanish attack during the Eighty Years’ War. The gate has survived the siege without much damage.

In 1865 the city council wanted to demolish the gate for the construction of a new bridge. The gate was in poor condition and stood in the way of the new bridge. Because the city at that time did not have enough money for a new bridge, the gate was left standing. The city council then came up with a budget for renovation for the short term, so that the gate could stay for another 2 or 3 years. When the Papentoren was demolished in 1867, the ammunition that was stored in the tower had to be moved, in the Amsterdamse Poort there was a suitable space. The Amsterdamse Poort was allowed to stay. In 1869 the bridge for the gate was finally built. In 1874 the (explosive) ammunition was removed from the city.

In 1960 the Amsterdam Gate became a national monument. In 1985 the Poort received a well-deserved, major renovation.